skip to main | skip to sidebar

This past weekend I did the work needed to go visit Kasey and Liz on their hike. After letting my drivers license lapse a couple of years ago, I finally got around to taking the road test that I needed to get it back. Many thanks to Holly for picking me up and letting me borrow her car for the test. I then contacted our friend Dawn to borrow her car for the weekend. Many thanks to Dawn for letting me use it all weekend. I knew that they were supposed to be getting a resupply on Marshall Pass sometime this weekend, but their cell service was way too spotty for them to let me know exactly when they actually got there. Thursday is when I finally knew that I'd be able to make the trip up and it turns out that is when they made it up there so they didn't even get my text to them that I was coming.

With all the prep work done I headed up after work on Friday. I left work an hour early to make sure I could get up there with some daylight to spare. The final 12 miles of the trip was up a bumpy dirt road and I had no access to Google Maps to make sure I was really headed the right way. Luckily there aren't too many turn offs so it was easy to find. When I made it to the top of the pass there was initially no sign of humans, plenty of cows though. I got out and started hiking up the trail to see if I could find a place to camp. Not far up I saw a cabin across a swamp and then I saw a woman in a skirt. Who else could that be, but my Kasey. I called across and she got all excited to see me. I ran back to the car and found the side road that led to the cabin. Their official resupply was from another friend, Dick, and he had already cooked them dinner and fed them beer, 2 bottles of Chimay and some boxed wine if I recall correctly. I settled in and they warned me of all the cow patties scattered about the camp. It turns out this area is a cow camp and there are many cattle roaming freely about. It wasn't too long before the sun set and we headed to bed.

In the morning the girls were ready to get moving again as they had been there since Thursday. I had originally planned to stay at the pass all weekend because I thought they'd be getting there Friday and want to take a day off. That didn't stop me from asking to tag along for their hike on Saturday. I had everything that I needed to camp including a large enough pack to carry my stuff so I packed it all up and joined them hiking in my worn out road racing flats. Lack of proper shoes wasn't as bad as it could have been. Some dirt got in, but because I can slip them off and on very easily emptying them was not a problem and I only had to do it a few times. Getting to hike with Kasey gave me plenty of time to catch her up on happenings at home and I got to hear about many of their adventures from the past few weeks.
The scenery was gorgeous and constantly changing. We had lots of pine forest, but would then open to fields with grand vistas. We also went through a couple of nice aspen groves. We were almost always going either up or down, but most of it was not too steep. There were a couple of places with a steep descent and some of them quite rocky which was the biggest challenge for my shoes. We saw quite a few mountain bikers including one through biker. There were also quite a few motor bikes out, especially towards the end of our day.
We finished our planned 11 miles around 3 o'clock at Tank 7 creek. There were some dark clouds rolling in accompanied by some loud thunder as we reached our destination so we got our tent up as quickly as possible. Luckily all we got were a few sprinkles as the storm skirted around us. A couple of other hikers came by a little while later and had to stop to dry out some of their gear as they had caught the brunt of the storm about a mile back on the trail so it must have just missed us.

We had fun hanging our bear bag, although we were more afraid of the marmots and chipmunks than any bears although Kasey did locate some scat that could have been from a bear. We also spent more time than was practical attempting to build a water diversion system on the uphill side of our tent in case it rained. Fortunately it didn't rain because I have my doubts about how well it would have worked. We headed to bead before the sun was down. I was pretty tired and fell right asleep.
In the morning we were up around 6:30 and after a quick breakfast we had camp torn down by 7:00. We said our goodbyes and each departed on our own way. Me back to the car, the girls further south moving ever closer to Durango. I had an uneventful hike back and made pretty good time. She is having fun out there, but has been missing me and I've been missing her so it was good to see her and catch up in person. 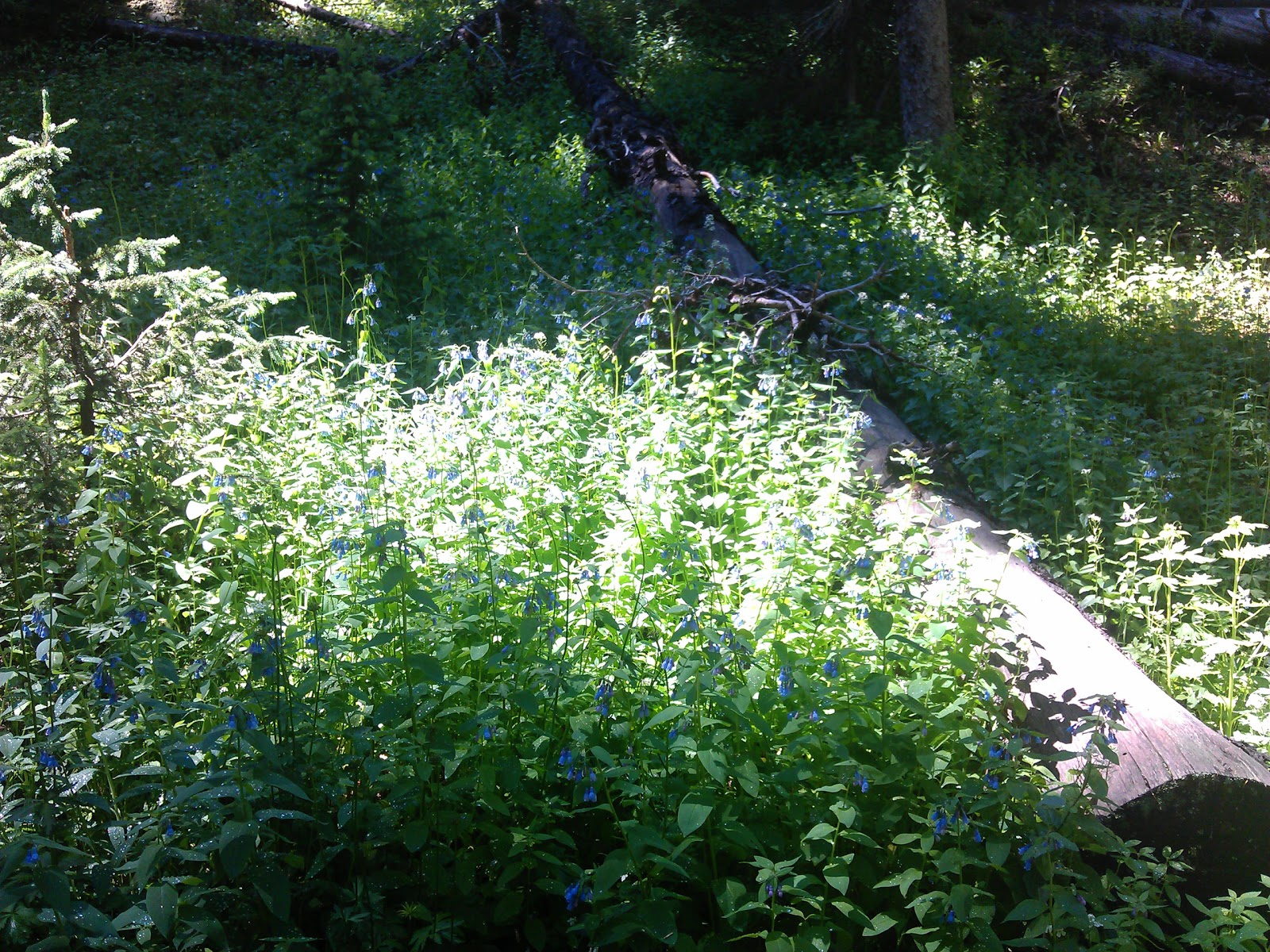 what a sweet entry, Mike! i am glad to have helped the teeny bit i did! Dinner was a real treat so thank you SO much!
(me dawn- i don't have time right now to fool with logging in to goole;-)