skip to main | skip to sidebar

From whence we came! 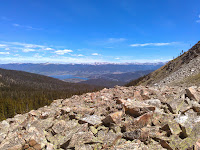 View from a saddle along the TenMile range of the Colorado/Continental Divide Trail. Only 6.5miles in to the 13mile day.
Posted by Determined Dame at 13:26 No comments:

Well on her way

I have been getting some "I'm OK" text messages from +Kasandra Robbert  throughout this past week and yesterday I finally got to talk to her on the phone. She sounds good.

They made it to Kenosha Pass a day early, but Kasey broke a tent pole that morning so they've decided to hang out an extra day while they wait for a friend to bring her a new tent from REI.
We did have a scare this week. The Lime Gulch fire started Tuesday night, and did so about 2-3 miles north of where they were camping. I heard about the fire on Wednesday, but thought it was in a different area. Thursday morning I decided to actually looked it up and realized it was very close. I spent the whole day looking at different maps of the trail and the fire. I learned that none of the maps were accurate enough to ease my mind. I finally got a friend to Email me their latest GPS coordinates and I got a text from Kasey so I knew they were out of the danger zone. They have since closed most of the trail that she hiked on the first 2 days. The other fires don't appear to be in their path yet. We'll pray that a new one doesn't block their way to the finish.

So, begins another journey! This one shorter than the last, and yet somehow so much more needed! It is funny how odd this feels as I prepare to head back out on the trail. I'm worried I am royally screwing up! My backpack feels way too heavy. I'm not sure I have enough food to get me through the days, although I have plenty for dinners the next 3 days! I'm worried about not having anywhere to camp despite having the whole wilderness. Despite my friend and I agreeing not to feel responsible for each other, I have to confess I feel a little responsible or concerned. At the same time, I'm thankful to have her with me keeping me tame in the beginning. No 16mile start day this time, and yet some how, I still feel like I am too ignorant to actually be able to do this hike. I know that will go away after a week...hopefully. It just feels so strange. Maybe 10yrs between long trails is not such a good idea! oh well, the one worry that is the same this time, is whether my husband will be okay. That worry only grew stronger after his bout of cancer. Maybe this hike will help that worry go away. I know he can take care of himself. I just worry that he will be okay! After all, we look after each other and have for almost 15yrs now! :o) Here is to peace & wellness. I hope to post as often as possible. I come off the trail to run the leadville marathon and hope to post then. This trail is not as populated as the AT and thus not as many known facilities. So, we will see what happens.
May everyone live their dreams every day! blessed be!
Posted by Determined Dame at 00:50 2 comments: 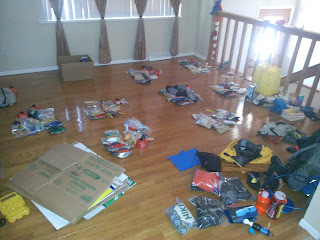 Not long now. The woods and mountains are calling me. This trail takes much more planning as it does not pass as many towns as the Appalachian Trail. We have to be a little better at meeting our food drops versus counting on some town to provide us what we need. The above picture is the organized chaos of my preparations.
Posted by Determined Dame at 16:53 No comments: